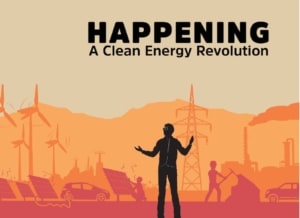 The film “Happening: A Clean Energy Revolution” will be the feature of the next Southern Oregon Climate Action Now meeting.

The movie will show from 6-8 p.m. Tuesday, July 30, at the Medford Public Library.

In a press release  [on the SOCAN July program] written by the SOCAN co-facilitator Alan Journet, he wrote, “filmmaker James Redford embarks on a colorful personal journey into the dawn of the clean energy era as it creates jobs, turns profits and makes communities stronger and healthier across the U.S. Reaching well beyond a great story of technology and innovation, “Happening” explores issues of human resilience, social justice, embracing the future and finding hope for our survival.”

He called it “an antidote to the depressing news of the 2019 Oregon legislative session.”

This is SOCAN’s response to the failure of House Bill 2020 to pass.

The bill, which aims to reduce greenhouse gas emissions in Oregon by placing a cap on the allowance and reducing that cap annually, passed the Oregon House but was killed in the senate, partly because of the Republican walk out, Journet said.

The bill would allow the largest polluters to buy allowances for how much greenhouse gas emissions they could produce, and that allowance would also decrease annually with a goal to reduce Oregon’s emissions overall and address the issue of climate change.

According to the Press release [on HB2020] , opponents of the legislation attempted to frame the proposal as an urban vs. rural Oregonian conflict.