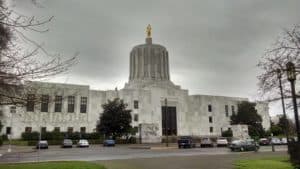 The contentious cap-and-trade bill that caused Republicans to flee the Senate for nine days was effectively pronounced dead on Saturday. But it may have a chance at resuscitation.

During a press conference today, Gov. Kate Brown said she is prepared to use her executive powers and direction of state agencies to propel the policies behind the bill forward, over Republican objections. The 2019 legislative session ended Sunday, meaning executive action from Brown is the last chance the legislation has at progressing this year.

Triumphs And Bruising Battles Made Oregon’s 2019 Legislative Session One For...