Why carbon is not always the appropriate target of our efforts

The failed 2018 Washington State Initiative 1631 is  a prime example of a policy that claimed to target greenhouse gases generally, but in reality only targeted carbon reduction.

Good climate policy should aim to reduce greenhouse gas emissions more broadly while also promoting regenerative agriculture and forestry management practices that maximize the uptake of carbon in the atmosphere into healthy soil and plants.  Since some 35 to 40% of current warming is caused by gases other than carbon dioxide, those who focus on carbon pricing will also need a policy that reduces the remaining greenhouse gases.

As we consider the problem of global warming and the climate chaos it is generating, we frequently read about carbon pricing, and the danger of an increasing concentration of atmospheric carbon dioxide measured in parts per million (ppm).  Note the atmospheric concentration is parts per million of carbon dioxide – NOT carbon. While it is certainly the case that the major contribution to our climate crisis is our combustion of fossil fuels, and also that these fuels all are carbon-based resources which release carbon dioxide among pother gases when burned, it is not equally legitimate to think only of carbon (or carbon dioxide CO2) when we consider greenhouse gas emissions.  Unfortunately, the focus on carbon when considering emissions, is overly simplistic and can lead to proposals to address global warming that are either not solutions, or may even make the problem worse.

In considering the issue of global warming, we should be very clear about what we are discussing, and adjust our language accordingly.  The rule of thumb is to remember that our target is reducing the concentration of Greenhouse Gases (GHGs) in our atmosphere.  Here are the basic concepts::

a) Fossil Fuels – Since all fossil fuels are carbon-based, it is reasonable to refer to removing carbon or decarbonization when the subject is the fossil fuel resources that drive our energy economy.

b) Regenerative Agriculture and Sustainable Forestry – Both activities rely on the process of photosynthesis which captures carbon dioxide from the atmosphere and sequesters it in plant biomass. Thus, it is quite reasonable to refer to carbon when discussing the benefits of regenerative agriculture or forest management that traps and stores carbon from the atmosphere and either builds up the organic component of soils or stores the carbon in the tissues of growing plants, such as trees.

Both activities rely on the process of photosynthesis to capture carbon dioxide from the atmosphere and sequesters it in plant biomass. Thus, it is quite reasonable to use the terms “carbon capture” or “carbon farming” when discussing these practices.

c) Emissions – First, not all greenhouse gases contain carbon, which is a frequent source of confusion. The greenhouse gas nitrous oxide (N2O), for example, contains no carbon. Although the other greenhouse gases contain carbon, the carbon is not equivalent.  In reality, using a Kilogram-for-Kilogram or lb-for-lb comparison Methane (CH4), is 86 times worse than CO2 on a 20-year basis, and 34 times worse on a 100-year basis.  Meanwhile, the Chlorofluorocarbons (CFCs) and Hydro-chlorofluorocarbons (HCFCs) are some 10,000 – 15,000 times worse.  Finally, carbon-free Nitrous oxide  is 297 times worse.  Stated another way, this means – for example – that releasing a ton of nitrous oxide into the atmosphere is equivalent to releasing 297 tons of carbon dioxide.  Thus, policies that attempt to reduce greenhouse gases by focusing exclusively on carbon completely  ignore nitrous oxide, and do not sufficiently address other climate-warming gases, some of which are even worse.  (Note: the values reported here constitute the carbon dioxide equivalent (CO2e) or Global Warming Potential (GWP) values for the other greenhouse gases as reported in the Intergovernmental Panel on Climate Change Assessment Report 5, Table 8.7, p. 714).

Pricing Carbon?
Since our efforts to reduce greenhouse gas emissions sometimes involve imposing a price on those emissions, whether through a tax/fee per ton of greenhouse gas emissions (measured in terms of their carbon dioxide equivalent) or by issuing, selling or auctioning compliance instruments/permits/allowances to emit greenhouse gases on the same basis in a cap and reduce program, we should again be mindful of the issue discussed above; we are not pricing just carbon, but greenhouse gases measured in terms of their carbon dioxide equivalent.  Additionally, we should be equally mindful of the need to undertake such pricing on a full life cycle basis, not just on the combustion emissions of the fossil fuel since, especially for natural gas, the main problem is the fugitive emissions that occur during fracking, processing and (pipeline) transmission of the fuel. It is, therefore, better to refer to ‘pricing greenhouse gas emissions’ rather than ‘pricing carbon.’  The dilemma is that climate activists have been talking about ‘pricing carbon’ for so long that this has become the common language.  However, even though we may know we mean ‘pricing greenhouse gas emissions as measured in term of a full life cycle carbon dioxide equivalent assessment,’ journalists, politicians, and those unfamiliar with the science are unlikely to interpret what we say in those terms. Thus, the mistake of targeting just carbon may be further promoted.

The Myth of Clean Natural Gas
It is often claimed that fossil (natural) gas is ‘the clean fossil fuel.’  This is not correct!  The claim is based on the reality (though a half-truth) that when we burn this gas, the energy generated per unit of carbon dioxide released is much greater (approximately double) than when coal is burned.   In terms of just combustion emissions, this means the gas is cleaner than coal.  But, again, this isn’t the complete story.  The problem is that fossil gas leaks from its extraction, through it processing and transmission, to its final combustion.  Since 90% of this gas is methane, and methane has such a high CO2e, not much has to leak to negate the combustion benefit identified above. Indeed, with a leakage rate of just 2.8%, fossil gas exceeds coal in terms of its global warming impact.  It has become increasingly evident that the leakage of gas from its extraction through to its combustion is generally as high or higher than this threshold. Due to these “fugitive emissions,” fossil gas is probably as bad if not worse than coal or oil for generating electricity or powering automobiles in terms of its warming impact. For a more complete discussion of the fossil (natural) gas conundrum, visit Fossil(Natural) Gas: A Bridge to Nowhere.

Policy Implications
Regrettably, if we propose, as a remedy to global warming, placing a cap or price on the carbon (or carbon dioxide) that is emitted from the combustion of the fossil fuel, we will inadvertently be encouraging utilities to switch from coal burning to fossil gas burning.  This is because, as discussed above, burning fossil gas releases less carbon dioxide per unit of energy generated. However, since the fugitive emissions negate that benefit, we may actually be making the global warming problem worse by switching to fossil gas.

When attempting to reduce emissions, our policy language must be very clear: we should target greenhouse gases measured in terms of their carbon dioxide equivalent and assessed over the full life cycle (cradle-to-grave / source-to-sink) of the resource.  Although most climate activists, and many policymakers and journalists, understand the above as the target, there is an unfortunate tendency to use the shorthand phrases “carbon reduction,” or “carbon-pricing.”  The consequence of this shorthand is that policies are then developed that only target carbon or carbon dioxide.  A perfect example of this problem was Washington state’s Initiative 1631 in 2018.  While proponents were convinced that this initiative targeted greenhouse gases, and the introductory language certainly referred to greenhouse gases, the actual regulatory paragraphs only targeted carbon (on p. 21) and carbon dioxide (on p. 22).  Initiative 1631, therefore, would have promoted the conversion of utilities from coal-fired to fossil gas-fired electricity. The Regional Greenhouse Gas Initiative program (RGGI) operating in several eastern/northeastern states targeting emissions from utilities has the same problem.  Unfortunately, the RGGI program only targets carbon dioxide from combustion.  As a result, while CO2 emissions have dropped as a result of the program, methane emissions have risen. These mistakes are highly consequential–and completely avoidable.

It is worth noting that the Paris Agreement, which we often tout in our efforts to reduce emissions, is very careful in its discussion of the issue. Greenhouse gas is mentioned 15 times, while carbon is mentioned only twice and these reference are appropriately in the context of the capture and sequestration of  carbon by forests through photosynthesis.

The message should be clear: effective climate policy should go beyond targeting carbon. Policies that focus on carbon or carbon dioxide emissions ignore greenhouse gases without carbon and substantially undervalue the contribution of the gases that contain carbon. Focusing exclusively on carbon could result in greater global warming emissions than before they were imposed 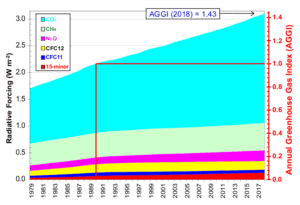 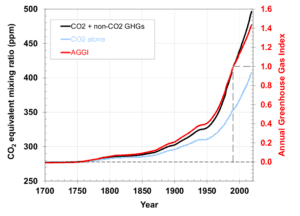 Discussion of the atmospheric concentration of greenhouse gases are often couched in terms of parts per million (ppm) carbon dioxide (CO2).  The reason for this is that historically (at least over the last few millennia) – prior to the fossil fuel use and industrialization stimulated by the industrial revolution, the dominant warming greenhouse gas assuredly was naturally occurring carbon dioxide, with methane and nitrous oxide somewhat implicated because of their low concentrations.  These are the basic gases that have maintained a global temperature sufficient to support life as it evolved and as early and pre-industrial Homo sapiens enjoyed it. At that time, the atmospheric CO2 concentration was about 280 ppm, with methane at a little over 260 ppb (parts per billion) and nitrous oxide at less than 260 ppb serving as trivial contributors.  Water vapor, an important greenhouse gas in its own right, lasts only a few days in the atmosphere and is thus more a response to warming than a primary cause.  However, as atmospheric warming causes increased evaporation, this gas will impose a positive feedback loop potentially accentuating warming. By the time modern CO2 recording began in the late 1950s, the level of that gas had risen to over 300 ppm, carbon dioxide.  The carbon dioxide contribution crossed400 ppm in 2013, becoming permanently above that level (the concentration of atmospheric carbon dioxide cycles annually) by 2016.   The concentration has now reached about 414.5 ppm, rising at about 3 ppm per year.  While emissions of methane from natural sources remained dominant for much of the period beyond the industrial revolution, by 1980, human-induced emissions of methane exceeded those natural sources.  However, the other greenhouse gases have also been rising as a result of human activities such that the current contribution of all greenhouse gases is approaching 500 ppm CO2e.  The Annual Greenhouse Gas Index, developed by NOAA to report the contribution of various greenhouse gases to global warming from 1990 (defined as 1) reveals that the contribution of other gases to overall global warming, measured in watts per meter squared at the global land surface causes some 35 – 40% of the total warming [Figure 1 (0.5/1.43) and 2 (90/215 since CO2e rose from 285 to 500 = 215 ppm, and the contribution of other gases rose for 0 to about 90 ppm)].   Interestingly, between the fourth and fifth Intergovernmental Panel on Climate Change Assessment Reports (AR4 and AR5) the contribution of carbon dioxide remained relatively constant, adjusting from 1.66 to 1.68  w/m squared while the contribution from methane rose from 0.48 to 0.97 w/m squared – effectively doubling the contribution of that gas.

The message again is clear: we ignore the other greenhouse gases, especially methane, at our peril.  Efforts that focus on carbon or carbon dioxide emissions ignore GHGs without carbon and substantially undervalue the contribution of the gases that contain carbon. Programs focusing on carbon could result in greater global warming emissions than before they were imposed.

For a discussion of the prevailing techniques for reducing greenhouse gas emissions, the cap and tax/invest approaches, visit ‘An Introduction to the Cap versus the Tax/Fee Approach’ to reducing atmospheric greenhouse gas concentration.