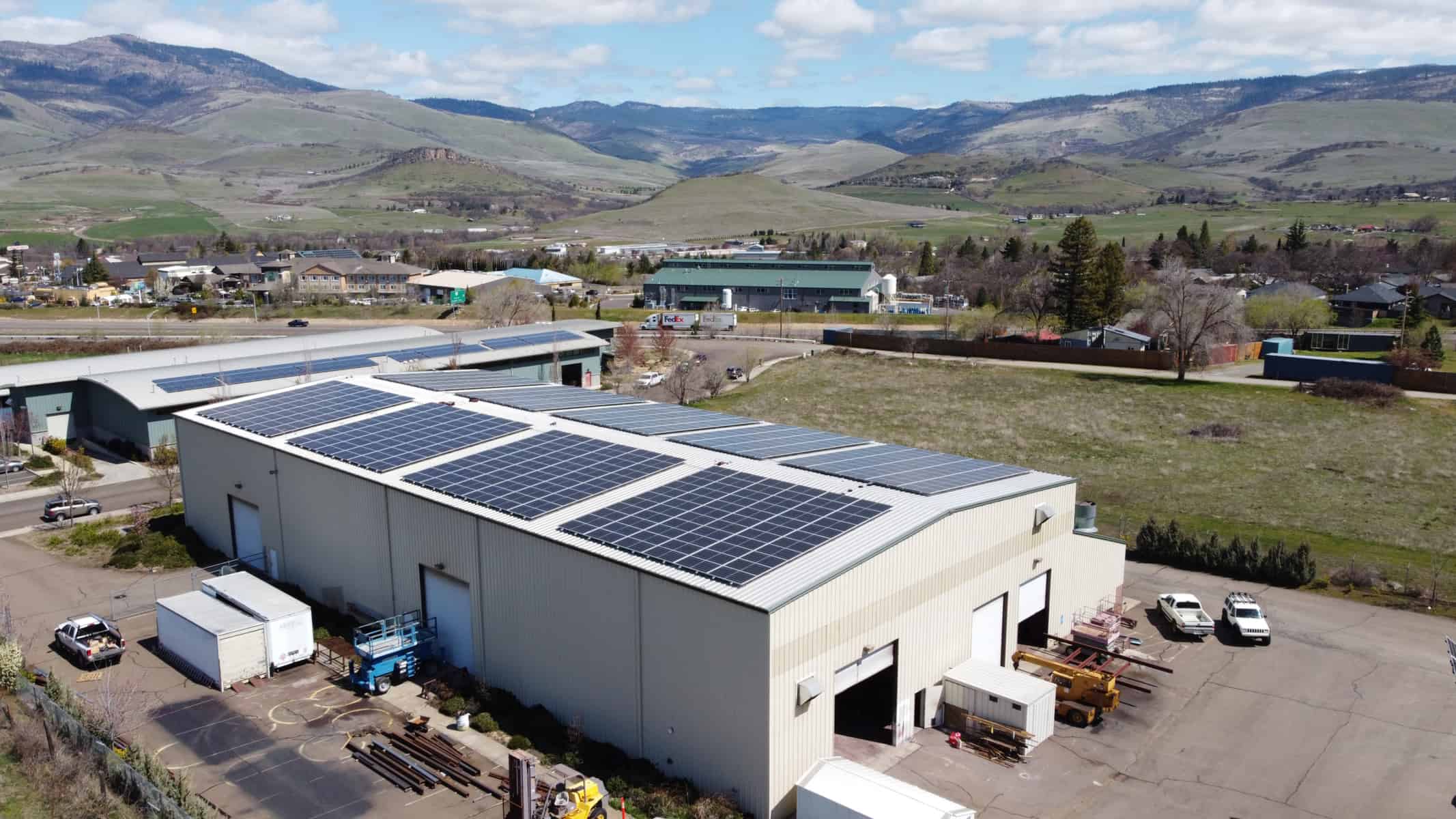 The Ashland Food Co-op has significantly increased its investment in solar energy in recent months. In April, the company turned on the switch for a new 528-panel array installed by True South Solar. With a solar energy production capacity of 197 kilowatts, it is now the largest single rooftop array in Ashland.

The Food Co-op’s newest solar array is physically located four miles away, on the roof of Oak Street Tank & Steel on Jefferson Avenue in South Ashland. This long-distance relationship was made possible by the City of Ashland’s Virtual Net Metering program.

VNM was approved in late 2017 to accelerate solar development in the City. While Ashland has abundant solar resources, it also has rugged terrain and a mature tree canopy. For many residents and businesses, rooftop solar is just not feasible. Through VNM (also called off-site solar), Ashland Electric ratepayers can buy into a solar system anywhere within the city’s electric grid and receive credit on their utility bill.  (Visit Ashland-solar.coop to sign up for updates on local community solar opportunities.)

VNM currently accounts for about 10 percent of the 3.25 megawatts of solar capacity installed in the city over the past 20 years.

The Food Co-op has a goal of achieving carbon neutrality by 2030. To reach that goal, it had already built three arrays on its own buildings, which produce 12 percent of their power.

“We had maxed out our solar production on our own property,.” explains AFC General Manager Emile Amarotico.  So, the Co-op began purchasing renewable energy certificates from Bonneville Environmental Foundation to help reach its net-zero goals.

The Oak Street Tank project is the next step in reaching its goals–and it’s an excellent business move as well.  “Local solar energy, at or below our expected future costs? What a great deal,” says Amarotico. “This is a model that works for us.”

True South Solar did the installation on the roof of the Oak Street Tank and Steel building in South Ashland. “Everything happened flawlessly,” says Amarotico.  “Now we’re producing up to 55% of our needs. And I want in on the next big deal.”

AFC is also looking at enhancing its resilience by adding battery storage, says Amarotico. “Even though we have solar, we can’t store it.” Corvallis-based Mayfield Renewables is doing a feasibility study for AFC to determine its needs and options.

Owners of large roofs or under-utilized land can use VNM to lease their roof or land for solar development that can be credited to other ratepayers.

“You’ve got to have sites, and you’ve got to have willing building owners,” says Tomas Endicott, developer for the AFC project.  The owners of Oak Street Tank “were willing to lease their roof for 25 years. That’s a long period of time.”

That wouldn’t work for every building owner.  “That’s a good reason to utilize public buildings,” Endicott explains.  The hangars at Ashland Municipal Airport, for example, could host a large community solar array.

Endicott sees a potential for more large solar arrays in Ashland –either for a single or multiple Ashland Electric customers joining together. “There’s a huge amount of solar resources here,” says Endicott. “There’s lots of opportunity.”

It makes perfect sense, agrees Eric Hansen, Principal Owner and General Manager at True South Solar. “The value proposition for this type of system is so compelling,” says Hansen. “VNM is working. Look at all the businesses that don’t have good solar resources.  And other businesses that can have an asset bringing in income while just sitting on the roof.”

A commercial system pays for itself in 6-10 years, Hansen estimates. “But it can be as fast as three or four years. There are no real maintenance costs, and your electricity rates are never going to go up. You just put it up.”

“It’s good business sense. And now that we have some sizable demonstrations to look at,” like the AFC project, “we are going to have more businesses moving forward in this direction,” Hansen predicts.