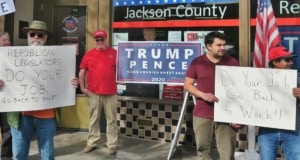 This Mail Tribune editorial really said it all;  Oregon Republicans have adopted the anti-democratic demeanor of the Trump White House and Congressional Republicans in rejecting representative democracy and their oaths of office and walking out to prevent discussion of huge array of legislative proposals addressing all manner of issues important to Oregonians of all political persuasions.

To protest this walk-out ROCPAC, SOCAN and ORD2 Indiviisible have been protesting in front of the Republican Party Offices in Medford and Grants Pass.  Interestingly, Republican volunteers in Medford initially engaged in discussions defending the walk-out, but later joined us on the street, even, and rather strangely,  bringing their Trump – Pence sign with them.

Contact
info@socan.eco
541-324-4501
Oregon carbon-reduction bill: The cost of inaction is too high