It’s always interesting to see how science deniers turn the objective conclusions of scientific research into vitriol and partisan conflict.  The Winter column by Alan Voetsch provided an illustration.  The title itself, ‘Real Climate Change Versus Fake Climate Change’ tells us instantly that Mr. Voetsch models his thesis on current White House tactics.  These involve scattering among occasional accurate statements among an array of irrelevant comments, half-truths, and outright misrepresentations of both what climate scientists claim and what the evidence indicates.  Applegate residents concerned about recent climatic trends bringing higher temperatures, reduced snowpack, and increased fire risk who read the Voetsch column might be confused about the cause.  With reference to the science, I will identify where Voetsch is accurate, and where he is not: 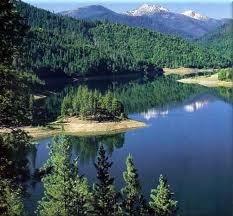 Voetsch starts by claiming that ‘alarmists’ seldom define the version of climate change to which they are referring.  It’s not clear what Voetsch doesn’t understand, but let me explain as clearly as I can:  the problem is a three-step sequence.  The first step is that greenhouse gases released as a result of human activities are increasing the concentration of these gases in our atmosphere (this is undisputed).   The second step is that the physical properties of these gases result in their absorbing more of the heat that is radiated from the earth’s surface outwards after incoming radiation in the shorter wavelength range (visible light, for example) is transformed into heat radiation upon colliding with the planet’s surface (also predominantly undisputed in climate science circles).  The third step is that the atmospheric warming is causing a series of changes in our climate regional and globally.  In some places this results in increased drought, in others in increased precipitation and flooding.  In general, the areas already wet become wetter, and those already dry become drier.   In addition, the increased heat energy in the atmosphere tends to cause severe weather events to become even more severe.  Finally, the warming Arctic results in a decrease in the difference in temperature between the polar region and temperate North America.  The current thinking is that this reduced temperature difference results in a slowing of the Jetstream and greater amplitude in its zig-zag passage around the northern hemisphere.  The result of this is that cold air hurtles down from the Arctic as the Polar Vortex (the probable cause of the current deep freeze in the eastern U.S.), while elsewhere around the globe (currently the western U.S.) warmer air is moving northwards.  Indeed, while much of the continent is experiencing a deep freeze, Alaska has been unusually warm.  These are patterns that most of us can see around us.

Certainly, it would be more accurate to itemize all these climate change outcomes of global warming, but rarely does anyone have that many words with which to play – either in spoken or written discussion.

Voetsch then claimed that ‘alarmists’ believe that global warming is only recent.  However, anyone spending five minutes exploring the issue objectively will know this is false.  Science operates by evaluating competing hypotheses, a fact Voetsch may not understand.  The competing hypotheses about the possible causes of the current warming come from the very studies of historic climate patterns that Voetsch seems to think are unknown to those scientists.  While Voetsch is correct in claiming that glacial periods last some 80 to 100 thousand years and inter-glacials are much shorter, and also in ascribing these largely to Milankovitch Cycles (which, incidentally, he described briefly but accurately), this isn’t the whole story.  Milankovitch cycles alone are insufficient to explain the temperature patterns.  In fact, the explanation implicates carbon dioxide, though clearly this ancient carbon dioxide flux (going back two million years and beyond) doesn’t relate to human activity. The slight warming induced by Milankovitch increases the escape of carbon dioxide to the atmosphere form ocean and land, and these greenhouse gas in turn accelerates warming.  Then, when Milankovitch impacts reverse, carbon dioxide is absorbed back by oceans and land accelerating the cooling.  In fact, according to Milankovitch trends, we have been descending into an ice age for several decades.  That global warming is not only causing warming but is also reversing the Milankovitch cooling testifies to the effectiveness of our emissions at promoting warming.

It is, indeed, correct that sea levels were many hundred feet below the current level during the most recent Ice Age (18 – 20 thousand years ago) and slowly rose thereafter as the ice melted and ice sheets receded.  Interestingly, it was because the sea level was so low that the Bering Land Bridge became exposed and humans dispersed across it and inhabited this continent.  However, the reference to this all happening without increasing carbon dioxide from fossil fuels, while correct, is only correct in its reference to fossil fuels.  As explained above, there was a change in the carbon dioxide flux between land/oceans and the atmosphere.  This is one of the examples of subtle half-truthing.

Voetsch then raises the specter of the minor warming and cooling events that have occurred over the last few centuries.  What he fails to point out is that these were mainly (Northern hemisphere) regional events having a rather small effect globally.  The best assessment currently is that these were caused by changes in the pattern of sunspots.

Later Voetsch claims that climate activists argue “97% of scientists believe ….” Again, this is incorrect.  First ‘belief,’ which relies on faith, is what Voetsch offers.  What science offers is not ‘belief’ but the most reasonable explanation available for phenomena in the real world based on available physical evidence. Studies of their opinions indicate that 97% of practicing climate scientists agree both that global warming is happening and human activity resulting in greenhouse gas emissions (including carbon dioxide) is largely responsible.  Anyone with cancer will visit an oncologist, not a cardiologist or pulmonologist.  This is because we rely on the judgment of experts in the discipline, not just ‘any’ expert, no matter in what they have expertise. By broadening the category to include all scientists, Voetsch misleads. Though the consensus among all scientists is actually consistent with that of climate scientists, it’s not quite as high.

While it is correct to state, as Voetsch himself demonstrates, many people (politicians included) don’t understand climate science, the smart but uninformed person (politician or not) will rely on the expertise of climate scientists.  However, Voetsch, presumably because the science doesn’t suite him, relies on disinformation provided by those placing partisanship above scholarship.

In accusing ‘alarmists’ of having an agenda of increasing taxes, regulations, and government power, Voetsch is simply spouting nonsense.  Probably everyone in the climate concerned arena, scientist of not, would like to see voluntary actions achieve the necessary emissions reduction goals.  Reality is, however, that Oregon has had a voluntary program in place for ten years, and we are not on a trajectory of emissions reductions sufficient to achieve those goals.  While some individuals might want to reduce emissions voluntarily, if this causes economic hardship for their business in competition with others who do not, they are discouraged from doing so.  And so, everyone continues to spew their climate pollution into our atmosphere, externalizing the cost and pocketing the profit.  What we should do is simply level the playing field so everyone competes on the same basis, and that basis is one of reducing emissions.  If Mr. Voetsch were to propose a better way to do this that does not involve regulations, we’d be delighted to learn what it is.

If the Michaels and Knappenberger book recommended by Mr. Voetsch is where he gathered his misinformation, that alone is enough to suggest interested and smart readers should ignore it.  Curiously, while Voetsch seems to deny the science regarding warming, the authors of his book largely accept it.  Rather, they suggest simply that warming will likely not be as serious as the consensus science suggests.  It’s not clear, however, how these authors explain why the current temperature trajectory is at the extreme high end of modeled projections.

Voetsch is correct when he suggests that climate science indicates hurricane behavior and wildfire risk are correlated with global warming.  Specifically, the science informs us both that spring-summer warming and early snow melt are the primary predictors of high versus low fire years and that, because of the warming trends, we are actually experiencing less forest burning than the climate suggests we should.  Similarly, the science tells us that hurricane intensity (not frequency) is determined substantially by ocean temperature increases.  With warming oceans everywhere, especially in the sub-tropical zones where hurricanes are spawned, it is small wonder that we are experiencing an increase in hurricane intensity.

Anyone with questions can submit them to climatequestions@socan.info; Southern Oregon Climate Action Now scientists will respond promptly.