Carbon dioxide (CO2) is the most commonly referenced greenhouse gas (GHG) and is the GHG released in greatest volume. Excess CO2 (and other GHGs) leads to atmospheric warming, which causes the global climate to change.  However, the effect of CO2 isn’t limited to global warming (Figure 1.) 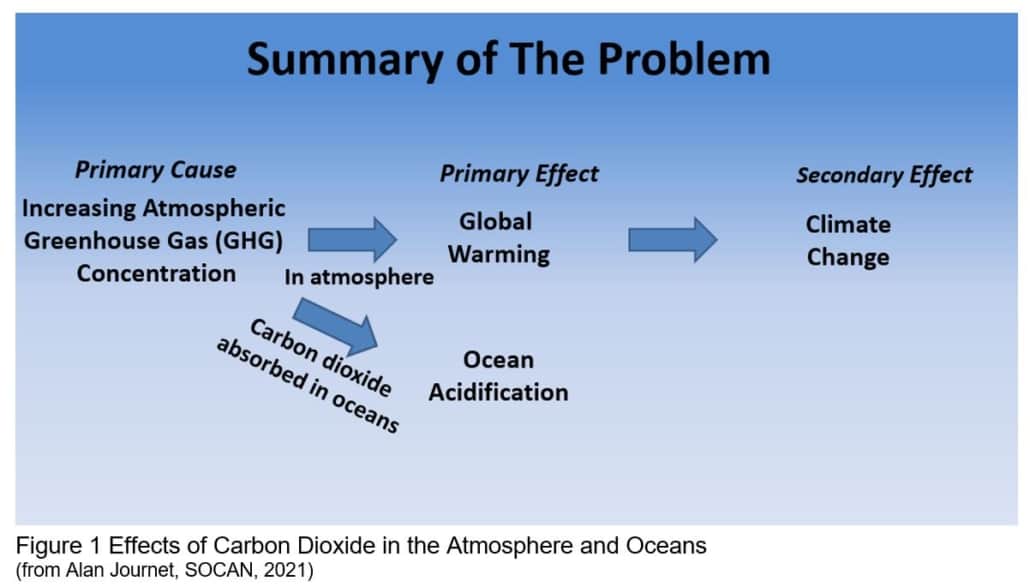 CO2 is readily dissolved into seawater where it exerts a powerful buffering effect that helps to control ocean acidity levels. For millennia, relatively stable atmospheric CO2 levels have contributed to a chemically stable marine environment that has allowed for the development of the complex marine food web we see today. However, over the past 200 years, since the industrial revolution, roughly 30% of the CO2 released into the atmosphere has dissolved into the oceans resulting in a more acidic ocean. The following discussion explains how increasing atmospheric CO2 increases ocean acidity, how the increasing acidity is already affecting marine life, and how these changes could affect humanity’s use of the oceans.

Chemistry of CO2 in seawater 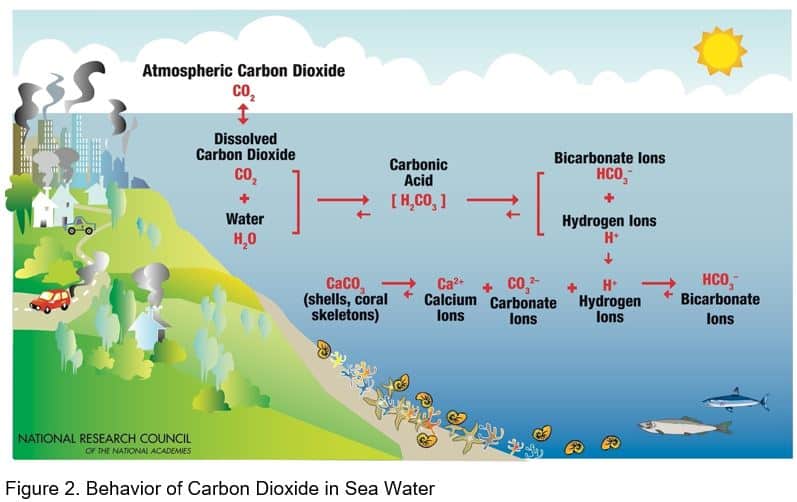 Under stable conditions, the incorporation of CaCO3 in coral reefs and the ultimate deposition of shells and skeletons of dying organisms into deep ocean sediments continuously remove CO2 from the ocean. This removal of CO2 helps to maintain a stable ocean chemical environment, including seawater acidity. Unfortunately, these buffering mechanisms operate at a much slower rate than the rate at which the ocean is gaining CO2 as we add more and more of it to the air through the burning of fossil fuels (coal, oil and natural gas.)

Changes in ocean acidity over time

The concentrations of CO2 in the atmosphere have been measured with precision for decades. The best known, long-term record was begun by Charles Keeling in 1958 at the Mauna Loa Observatory in Hawaii and has been continued to this day (Figure 3). In 1988 the ALOHA (A Long-term Oligotrophic Habitat Assessment) deep-water sea water sampling station was established north of Oahu. The amount of CO2 dissolved in the seawater was calculated and the associated pH (acidity) was measured with reliable precision.

Measurements of seawater pH have been collected around the world for over a century. However, for a variety of reasons the accuracy of previous pH measurements is suspect, sometimes substantially. Factors such as in situ seawater salinity, temperature, and pressure as well as different measurement techniques and apparatus and reporting metrics all affect the reported pH. Inferences have been made as to changes in global ocean pH but they are subject to many assumptions and significant uncertainties. Within these limitations, scientists infer that there has been an approximate 0.1-unit pH decrease over the past 100 years. It is worth recalling that pH is a logarithmic scale. Thus a shift of 1.0 in pH represents a ten-fold change in acidity.

This change represents an approximately 30% increase in acidity, which could increase to an additional 120% increase in acidity by 2100 if CO2 emissions continue on the current trajectory. Such an increase could result in a seawater pH 7.8 or 7.7. While a 0.1 (or even 0.5) unit change in pH may seem small, it would mean an ocean at the end of the century that would be more acidic than it has been in the past 20 million years.

Since collection of the initial samples, the pH of the ocean water at the ALOHA sampling station has dropped from roughly 8.1 to 8.0. These data reflect that local conditions can affect pH compared to average global pH estimates. They also show how seasonal fluctuations in atmospheric CO2 are mirrored in seawater pH. Finally, the data show a strong correlation between annual long-term changes in atmospheric CO2 concentrations and seawater pH. 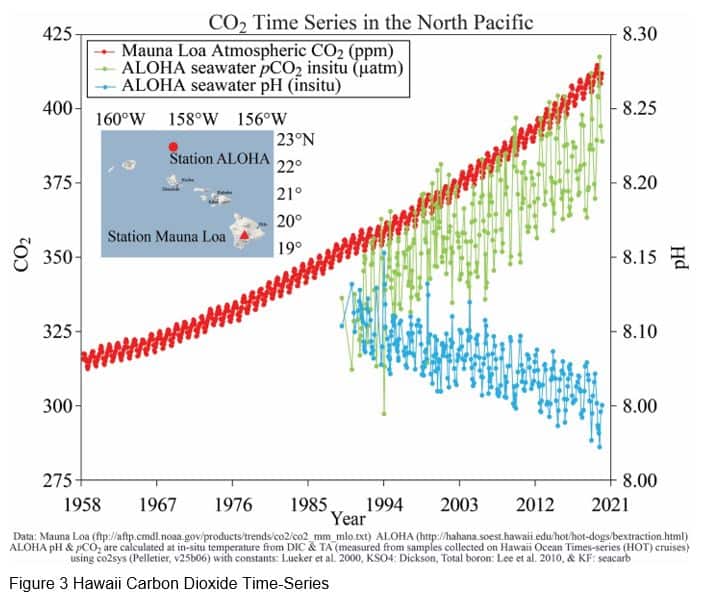 More acidic seawater can affect marine organisms in several ways, directly by dissolving their shells and indirectly by making them work harder to make their shells, or by causing more subtle changes to their physiology.

When carbonate ions are scarce in seawater, early life stages of shelled animals may be unable to produce enough calcium carbonate to properly build their shells or skeletons. This limitation may make for weaker, thinner, or malformed shells and can lead to larval death. Alternatively, even if they successfully build shells, they may have to expend so much energy extracting the calcium carbonate that they have insufficient resources to grow muscle, nerves, or other tissues. Especially for early life stages, those thinner or weaker shells and/or a slower growth rates may make them more vulnerable to predators as they take longer to mature and have less energy to escape. In addition, since many marine organisms live in near balance with the historic seawater chemistry in which they evolved, an increase in acidity may weaken them by interfering with critical body chemistry processes.

Beginning in 2007, the Whiskey Creek shellfish hatchery in Netarts Bay on the Northern Oregon coast, saw a nearly 80% mortality in their cultured oyster larvae with similar declines at hatcheries elsewhere in the Northwest. After a couple years of searching for answers, the scientists recognized that the lower pH of the feed water was preventing the larvae from growing their shells resulting in mass mortalities. With careful monitoring of their feed water, they have accommodated to low pH events, but with increased costs in labor and equipment. Unfortunately, naturally spawning shellfish living in the estuary don’t have the luxury of human intervention to buffer excessively acidic seawater, which can result in significant loss of endemic larvae recruiting to the local environment.

Acidification occurs in the open ocean as well as estuaries. Pteropods are free-swimming marine snails that are a favorite food of salmon, herring, tuna, and other widely harvested food fish. In 2012 researchers first reported extensive dissolution of the shells of pteropods in the upper layers of the ocean off Antarctica. Similar results have since been shown in laboratory treated pteropods. Since pteropods are a primary link near the base of our marine food web, reductions in their abundance can have a profound effect up the food chain and can jeopardize our reliance on the ocean for our protein.

In addition to pteropods, the shells of Dungeness crab larvae are showing dissolution of their carapace (body), legs, and sensory receptors, which they rely on to sense and navigate their environment. Losing shell protection and senses and deviating energy from growth to deal with shell loss can have a significant impact on the survival of the larval crabs. The researchers estimated that there has been an 8.3% increase in external carapace dissolution over the last two decades, and dissolution rates that they hadn’t expected to see until much later in this century.

Not only are shell formation and maintenance affected by ocean acidification, but lower pH levels can also cause other physiological changes. In some fish including coho salmon, increased seawater acidity can interfere with their sense of smell, which they rely on to avoid predators, find food, and navigate to their home streams. So, for many fish species, ocean acidification can be a triple whammy, reduction in food, less threat awareness, and difficulty in returning home to spawn.

It’s useful to note that much of the attention paid to the effects of ocean acidification has centered on commercially valuable species such as oysters, clams, and crabs. There is no reason to expect that these same impacts are not affecting other, lesser studied species. In addition, some species will likely show much greater adaptability than others. Mussels exposed to seawater with naturally fluctuating pH showed less reduction in shell growth and lower mortality than mussels from seawater with more stable, higher pH.

So, as ocean conditions change and some species are able to adapt more quickly than others, and some may be unable to adapt at all, ecological relationships will change. Those changes may lead to an increase in highly adaptable, more generalist species and a reduction in more specialized species, which can result in a reduction in biodiversity. One group that may become more prevalent would be the jellyfish; they don’t make shells, seem to tolerate the changing ocean conditions, and may thrive in the new seawater. Unfortunately, they don’t tend to make for good eating – unless you are a leatherback turtle.

Impacts of Ocean Acidification on Humans

Ocean acidification has the potential to affect all levels of the food web, from the smallest phytoplankton and zooplankton, to the large fish we count on for our protein. These environmental pressures may result in changes in dominant species, less bio-diverse food webs, fewer species to harvest, and more insecurity in ocean-derived protein.

By one estimate, fisheries provide the primary source of animal protein for more than 3.1 billion people globally, nearly half the world’s population. A reduction in ocean-derived protein sources would have a major impact on global nutrition.

More locally in Oregon, Dungeness crab has typically been Oregon’s most valuable single-species fishery over the past decade, with the to-the-boat value ranged from $33 million to $74 million. For oysters, another key commercial species to Oregon, commercial mariculture of oysters is estimated to have an annual, direct economic value of about $10.6 million. Also, commercial clammers generate about $0.5 million annually from the harvest of bay clams and razor clams. In addition, recreational harvest of clams and crab has been responsible for $38 million in annual, direct and indirect expenditures on the Oregon coast. Significant persistent reductions in larvae that support these industries could have dramatic impacts to these fisheries.

Focused fixes such as can be achieved by shellfish hatcheries as they clean and buffer their water are useful local responses but will be too limited to address systemic damage to the entire food web.  The fact that the impacts span the full food web means that the effects are systemic. Fortunately compared to global warming, the primary driver of ocean acidification is carbon dioxide rather than the larger set of GHGs. Stopping the burning of fossil fuels can make a major impact not only on the temperature of the atmosphere (and oceans) but the equally “evil twin” of ocean acidification.