Thanks to the efforts of the U.S. Forest Service Mapped Atmosphere, Plant and Soil System (MAPPS) team at Oregon State University, global projections used in the Intergovernmental Panel on Climate Change 2007 Fourth Assessment Review (FAR) have been downscaled to allow a vision of the probable trends in the Rogue Valley for the coming century.  Those data were used in the production of a 2008 report entitled ‘Preparing for Climate Change in the Rogue River Basin of Southwestern Oregon’ by Doppelt, Hamilton, Deacon Williams, and Koopman. The projections reported here are derived from the data from which that report was written.  Consequences are derived from that report and other sources as indicated. 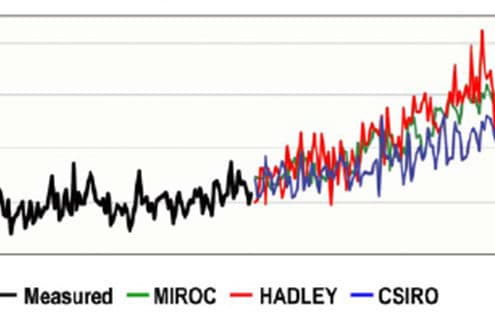 This graph identifies the historical temperature trend (black) and the projections according to three General Circulation Models: MIROC is Japanese, Hadley is British, CSIRO is Australian.  These models exhibit patterns typical of the array of models available but were used by the MAPSS group because they incorporate variables important for the forest analyses they were undertaking.   The projections in each are based on the ‘Business As Usual’ scenario meaning that they assume we continue doing what we have been doing without much effort to adjust our behavior. Regrettably, this seems to reflect most accurately our likely behavior.

The projected temperature changes reported here are based on comparisons with actual 1961—1990 averages when the annual temp. was 50.0⁰F, winter temp. was 38.1⁰F, summer was 63.6⁰F and August was 66.0⁰F 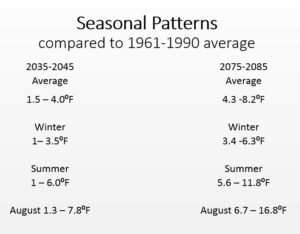 Even ignoring any other potential consequences the projected temperature increases alone would be devastating to our natural systems – our forests, woodlands, grasslands, wetlands, savannas, rivers, and lakes.  A couple of degrees might be manageable, but 8 degrees would probably exceed the tolerance of these systems.  Our agricultural and forestry activities would likewise be severely compromised – threatening the livelihoods of those directly and indirectly living off the land.