Fire-Resistant Landscaping in the Rogue Valley

Adapting to Climate Change: An Introduction to the Climate-Smart Conservation Approach Summary of what comprises Climate Smart Natural Resource Management

Forest and Fire Toolkit: Rural Living in the Siskiyou Mountains

A brief discussion of Firewise Communities

Denying the claim that climate change is having no effect on forest species composition:

Trees, fighters of climate change, are also victims of it

With a warming climate, coastal fog around the world is declining

Interactions of predominant insects and diseases with climate change in Douglas-fir forests of western Oregon and Washington, U.S.A.

The Second Draft of the Climate Change and  Carbon Plan

SOCAN Comments to Board of Forestry on the above plan

The Rogue Basin Cohesive Forest Restoration Strategy developed by the Southern Oregon Restoration Collaborative and The Nature Conservancy. This was developed concurrently with the Ashland Forest Resiliency Project and incorporates the same basic techniques.

Klamath-Siskiyou Wildldands Center (KSWild) Wildfire Dashboard keeping you up-to-date with all the latest wildfire and smoke data and forecasts. The list of resources is growing as the fire season shifts and new tools become available. Check back in to see the latest information.

SWOFIRE – the official website of Southwest Oregon District, Oregon Department of Forestry – for wildfire updates in Jackson and Josephine Counties. 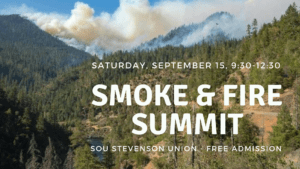 The video is broken into four segments, one for each Panel:

In recognition of the important role that healthy forests can play in addressing climate change by sequestering carbon, the SOCAN Board has endorsed this platform.  We invite other organizations to do the same – possible from the linked website.

SOCAN Comments on the DEQ-ODF Smoke Rulemaking Proposal Comments submitted in response to the proposal to adjust rules to allow prescribed fire during the non-fire season.

The forest for the trees: Global warming is here now, a column by Alan Journet in The Spring 2018 issue of The Applegater

What Happened When a Public Institute Became a De Facto Lobbying Arm of the Timber Industry Rob Davis, The Oregonian/OregonLive, and Tony Schick, OPB,  August 4 2020

Rogue Forests for the Future Presentations as pdf files