October 4th; Congressional District 2 and Jackson County Board of Commissioners Positions 1 and 3

October 18th; Oregon Senate District 3, House Districts 4, 5, 6, 56.
[Video recordings were developed by Mick Mulhall, GrassRoots Sound Co., Ashland, Oregon and local videographer Wanda Borland who produced the video for an episode of her series ‘A FOCUS On ….’ aired on RVTV.]

SOCAN Federal and State Project candidate forum team organized two forums at Medford Public Library to hear the candidates’ positions and proposed actions on climate and the environment. Both forums were held from 7-8:30 pm, with informal meet and greet afterwards.

These events were free and open to the public. All candidates for these positions were invited. SOCAN’s planning team sent its list of questions to all candidates 2 weeks prior to the forums. Audience questions were also invited.

Oregon’s 2022 Legislative Session A list of the session outcome and the bills that SOCAN supported or opposed during the 2022 legislative session.

Good: $50 billion in climate resilience funding will protect people from the storms, droughts, floods and other extreme weather events made worse by climate change

It’s not clear how this will end up, whether passed as a package or divided into constituent parts.

Hold the Line on Climate Spending

In the discussion about the Build Back Better (Reconciliation) Act, there is pressure to reduce the overall cost from the current $3.5 trillion in order to secure Senate passage.  Please urge our Oregon Congressional Delegation to retain the $700 billion for climate action.  We are already way late in addressing the climate crisis, we cannot afford to reduce this commitment.

We tend to focus our attention on what the White House and Congress do, but the agencies are also important. For example, in the Trump era (for example):

Supreme Court of the United States (SCOTUS): Conservative majority may reverse Massachusetts vs EPA (2007), the decision that  confirmed that EPA has authority to regulate GHG emissions

A Carbon Dividend Trust Fund is established to distribute the funds raised as monthly rebate payments to citizens and lawful residents.

The emissions trajectory from the bill is depicted in this table:

Which I (AJ) graphed here: 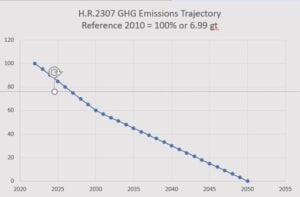 A second concern is whether the fee structure of $15 per ton raising by $10 annually is likely to achieve the trajectory and goal suggested.  The answer to this question is: probably not! When the Oregon legislature was considering a carbon (greenhouse gas emissions) pricing policy in 2013, instead of passing it, they funded a study conducted by the Portland State University Northwest Economics Research Center on the economic impacts of such a plan.  The subsequent report: Economic and Emissions Impacts of a Clean Air Tax or Fee in Oregon (SB306) concluded that in order to achieve the downward emissions trajectory embodies in Oregon’s 2007 (HB3543) voluntary emissions reduction target (75% below 1990 level by 2050) the fee per ton of carbon dioxide equivalent (CO2e) emissions would need to be imposed above $150 per ton.

The target of 75% below the 1990 emissions of 58 Million Metric Tons (MMT) of CO2e is 14.5 MMT.  As this graph indicates, even with a fee of $150 per ton, emissions drop until around 2028 and then rise again.   In Oregon, even $150 is inadequate to stimulate the trajectory established in the 2007 legislation.   There is no reason to think that the Oregon energy economy is sufficiently different from the rest of the nation that HR2307 fee of $15 a ton rising by $10 increment annually will remotely achieve the designated trajectory or goal.

The evidence is clear that if we hope to prevent the worst outcomes of global warming that crossing a myriad of tipping points would impose, we absolutely must restrict warming to 1.5⁰C pre-industrial conditions.  The latest (2021) Intergovernmental Panel on Climate Change report (AR6) indicates clearly that to limit warming to that level, we have an emission budget from 2020 of 500 Gigatons (for a 50% chance, of 400 GT for a 66% chance and of 300 GT for an 83% chance.  Our deadline for reaching net zero, then is 2030, 2028, or 2026 depending on what percentage risk we wish to bear.

While HR2037 demonstrates commitment on the part of its sponsors to address the climate crisis, it almost certainly fails to offer a trajectory that would achieve the reductions we need.

The proposal would require the President to declare a national emergency relating to climate change under the National Emergencies Act, and for other purposes…

The Carbon Mistake A discussion of when it’s appropriate to focus discussion on carbon and when this is not appropriate and actually generates counter-productive confusion.

The Natural Gas conundrum   A discussion of why fossil (natural) gas is not a climate solution.

The Climate Science Consensus A discussion of the twelve step sequence comprising the climate science consensus describing the science of global warming and the climate chaos it is causing.