Oregon has a reputation for being a leader in the arena of environmental protection. Back in 2007, we were one of the first states to establish greenhouse gas emissions reduction goals.  We have also led in terms of beverage (bottle) container deposit policies, and maintaining coastal beach access for the public. Unfortunately, we are not on a trajectory to achieve the emissions reduction goals established by the 2007 purely voluntary policy. Meanwhile, in 2018 we have seen reports appear from multiple sources indicating how urgent it is that we reverse global warming and start now.  Since we have suffered two years from a Federal Government that is committed to denying climate science and labeling it a hoax, the pressure on states to step up to the plate is even greater.

Fortunately, Oregon’s Governor, House Speaker, and Senate President have committed to introducing and passing meaningful greenhouse gas emissions reduction policy in the 2019 Legislative Session.  However, economic forces invested in driving our planet towards ever-increasing temperatures and the devastation that such would cause are equally committed to thwarting these efforts.

Join us on Tuesday January 29th at 6:00 pm at the Medford Public Library to learn more about the proposed legislation and how you can get involved to help Oregon lead by example in the critical fight to preserve a livable planet.  The program will explore why we need legislation, what the legislation will do, and what it will means for Oregon residents.

These meetings are free and open to the public 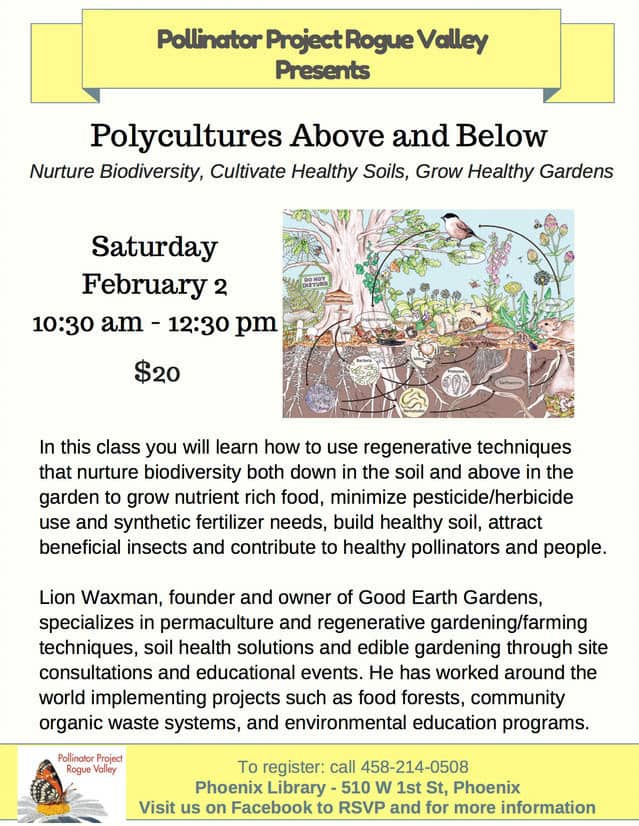 Polycultures Above and Below
Scroll to top