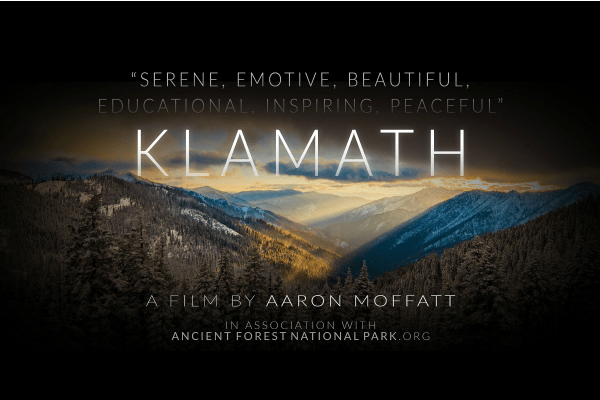 The new film Klamath is promoting an Ancient Forest National Park along the California-Oregon border. The Klamath-Siskiyou (KS) area, dubbed the Red Rock Rainforest and the Galapagos of North America by scientists, includes the largest remaining and most biodiverse intact forest ecosystem in the United States outside of Alaska. The film is a pleasure to watch and focuses on the natural beauty of the Klamath-Siskiyou region, which has been proposed as a UNESCO World Heritage Site.

Four years in the making, the film’s message is urgent: this biodiversity hotspot must be protected. Two studies just published emphasize the immediate need to stop a catastrophic loss of biodiversity worldwide. “The researchers observed that even areas containing 80 percent of their primary forests… lost between 39 and 54 percent of their conservation value in terms of biodiversity losses” (due to human cumulative impacts). Yet the wild Klamath-Siskiyou forest is becoming smaller every day, logged and mined at the hands of local entities who seek immediate profits and gain.

The ancient forests that once spread from coast to coast of the United States are almost gone; less than 10 percent of what was here when European settlers came to the North America still exist, and almost all is in southeastern Alaska.

Film maker Aaron Moffatt says about the Klamath-Siskiyou, “Complex geology, climatic conditions, and impassibly rugged river canyons have inspired some of the greatest technological feats of history here — technology created by life over billions of evolutionary cycles to survive otherwise unsurvivable conditions. This vast aggregation of ‘biome tech’ is an inestimable resource to our own future and technological development as we move toward the coming centuries, where the health of vast cities and success of the space age will rely on industries learning and utilizing the intricate systems of water and air purification and infinite molecular recycling techniques developed by ecosystems over 3.8 billion years.”

“KS Film has spent the last four years filming in some very rugged forested land. It’s been, at times, a mighty fete lugging camera equipment into remote areas that are not readily accessible by a road system originally put in place to transport logging equipment to trees or mining equipment to mineral deposits,” says Alden Moffatt, who mapped the Ancient Forest National Park Proposal. “Even the trails in the Klamath-Siskiyou have a history: they were mostly constructed for mining or to get cattle into high country meadows. The Pacific Crest Trail was put where it is to sometimes protect fragile meadows and lakes, but also to avoid looking at clearcuts and the worst of the so-called “management” of the Klamath and Siskiyou National Forests. The film also avoids looking at these eyesores in order to give a sense of what the Klamath-Siskiyou used to be like in its entirety. Mostly, the film was taken in “roadless” areas – places that are not designated as protected by an act of Congress, but are still largely intact, free of logging scars and nearly as they were hundreds of years ago. Of the whole ten million acre Klamath-Siskiyou bioregion, about one third is still in good shape.”

Aaron Moffatt talked to many scientists on the way to producing the film Klamath; “I didn’t want to get politics involved in the film, just show and talk about what the Klamath-Siskiyou is. Repeatedly I heard from scientists the area I was filming is one of the most biodiverse areas in the world due its proximity to the ocean, its diverse rock and soil types, and its jagged, multifaceted mountains.” This is among the most diverse coniferous forest in the world (Whittaker, 1960). The Klamath-Siskiyou bioregion served as a hideout for many plant species through the last Ice Age. The mountains were never entirely covered by the ice sheets, and their microclimates allowed plants to migrate as needed while the climate shifted, from warm to cold and back again.

There are over a hundred roadless areas, wilderness areas, wild and scenic rivers, a national recreation area, and botanical areas that help protect the heart of this magnificent region. But many of those designations are administrative and could be reversed with the stroke of a pen. The threats to the area are mostly from fragmentation, isolating high elevation wilderness islands in a sea of low elevation clearcuts. But many factors threaten the biodiversity for which the region is famous: Mining, grazing, logging, air and water pollution, and weather and climate modification are pushing constantly to degrade this wonderland. Over the last 60 years, mighty fish runs have been reduced to a pittance, invasive species have taken over some ecosystems, clearcuts have denuded many epic lowland canyons, and water and air quality have been reduced.

“We would expect the Galapagos to have the greatest protection possible, and so should the Klamath-Siskiyou. The Ancient Forest National Park Proposal protects the the heart of and the most intact portions of this extremely important region,” according to Alden Moffatt. “There are no national parks in the United States that protect a whole forest ecosystem, capturing the climatic spectrum from rainforest to desert.”

Theresa McCoy, “The quality of this production is impressive. Amazing shots of breathtaking scenery and compelling narrative. So well done!!”

Gwen Hutchings, “Captivating. Best hour of my day so far!!”

Pam Cundy, “Thank you so very much for making this available. It helped my heart today.”

Sean Bagshaw, “Why I love where I live, spectacularly illustrated”

Climate Change and the Rogue Valley