The story so far….

For many years, Oregon grassroots climate activists have been working with sympathetic state legislators to enact legislation that would establish a meaningful greenhouse gas (GHG) reduction program in the state, a program commensurate with what the best available science tells us we need.  Current best available science is contained in the Intergovernmental Panel on Climate Change (IPCC) 2021 Assessment Report 6 of Working Group I on the Basic Physical Science.  One of  the more disturbing concepts presented in the report concerns the length of time we have to reach net zero emissions (meaning emissions resulting from our human economic activities are balanced by sequestration of atmospheric greenhouse gases) if we are to limit global warming to the 1.5⁰ Centigrade above pre-industrial conditions that the IPCC 2018 report ‘Global Warming of 1.5⁰’ indicated is necessary. If we fail to limit warming, we are likely to cross tipping points in many critical areas and essentially consign future generations to an unlivable planet.  The 2021 IPCC report argues that our budget for greenhouse gas emissions is such that to have a 50% chance of limiting warming as prescribed we have but 9 years (2030) to reach net zero emissions, while for a 66% chance we have 7 years (2028), and for an 83% chance, we have 5 years (2026) at the current rate of emissions.

As can readily be seen, this means the goals established in the purely voluntary GHG emissions program enacted in 2007 (HB3543) of 70% below 1990 levels by 2050 is completely inadequate.  Of course, Oregon is not on an emissions reduction trajectory that will anywhere near meet even that goal anyway.  This is why there has been such a strong push towards a legislatively enacted program that would impose greenhouse gas reductions. 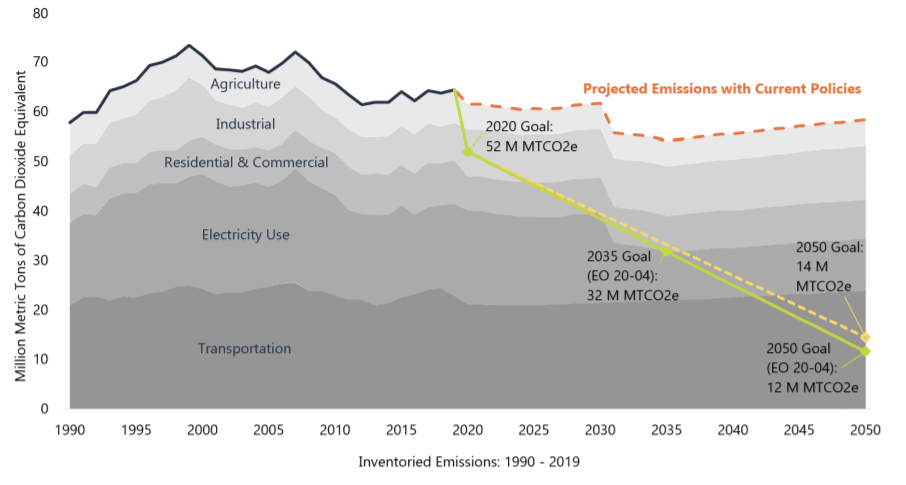 This figure, from the Oregon Global Warming Commission Biennial Report 2020, depicts the historical trend in Oregon’s GHG emissions (black line) and the future trend (dashed red line) assuming we continue our Business As Usual behavior of increasing fossil fuel use and consequent GHG emissions.  The yellow dashed line represents the trajectory that the 2007 program targeted while the solid light green line just below that represents the trajectory required by Governor Brown’s Executive Order 20-04 (see below for discussion).  The sudden drop in emissions depicted for 2030 results from passage in 2016 of SB1547, the Coal to Clean Bill that requires by 2030 all electricity sold in Oregon shall be generated in power plants that do not use coal as their feedstock. Presumably, rather than modeling a gradual phase-out of coal, the modelers assumed a rather sudden phase-out.

It is because the failure of Oregon to achieve the trajectory depicted above has been evident for many years that efforts to establish a program legislatively were initiated several years ago.  These efforts culminated in meaningful bills that were stymied in 2019 (HB2020) and 2020 (SB1530) by Republican walk-outs from the legislative chambers who denied the chambers a quorum and thus thwarted passage of these (and many other) bills.

It was this history of legislative failure that led Governor Brown to issue Executive Order 20-04 in March 2020.

The basic principle of Governor Brown’s Executive Order  (EO) 20-04 is that 16 designated state agencies and commissions should use all their authority to develop plans that will result in Greenhouse Gas reductions:
emissions dropping by at least 45% from the 1990 level by 2035 and by at least 80% from the 1990 level by 2050.
This will be achieved while maintaining equity and social justice as a prime consideration, and ensuring that proposals shall be cost effective.

While most agencies have developed or are developing climate programs, it is probable that the most critical of these is the Climate Protection Program (CPP) under development by the Department of Environmental Quality because this is the program that will contribute to reducing emissions from transportation fuel suppliers (combined with the beefed up clean fuels program), and stationary sources (i.e. industries and utilities).

In response to their charge, from Governor Brown’s Executive Order, DEQ organized a series of Technical Workshops during summer and early fall 2020, followed by public Townhalls.  The real business of developing a program was initiated in January of 2021 as a DEQ Rulemaking Advisory Committee (RAC), comprising representatives of stakeholders, started monthly meetings to offer commentary to DEQ on critical proposed components as DEQ developed the proposed program.  The final draft of the proposed Climate Protection Program rules was released by the DEQ Office of Greenhouse Gas Programs for a 60-day comment period in early August with a public comment deadline of October 4th.  While there have been some positive aspects to the process and final rules (notably the transparency and willingness to discuss issues that DEQ has displayed throughout, and staff responsiveness to some concerns), it is the general feeling among those of us observing and engaging in this process that there are a number of opportunities that DEQ has missed.  It is to draw attention to these shortcomings, as well as compliment aspects we support, that we are encouraging as many folks as possible to submit comments to DEQ and/or Governor Brown on the draft rules. Comments are necessary both to resist opposition arguments and encourage strengthening on the rules.

The basics of the DEQ program are: